I’ll tell you a story, about Holly and Ivy 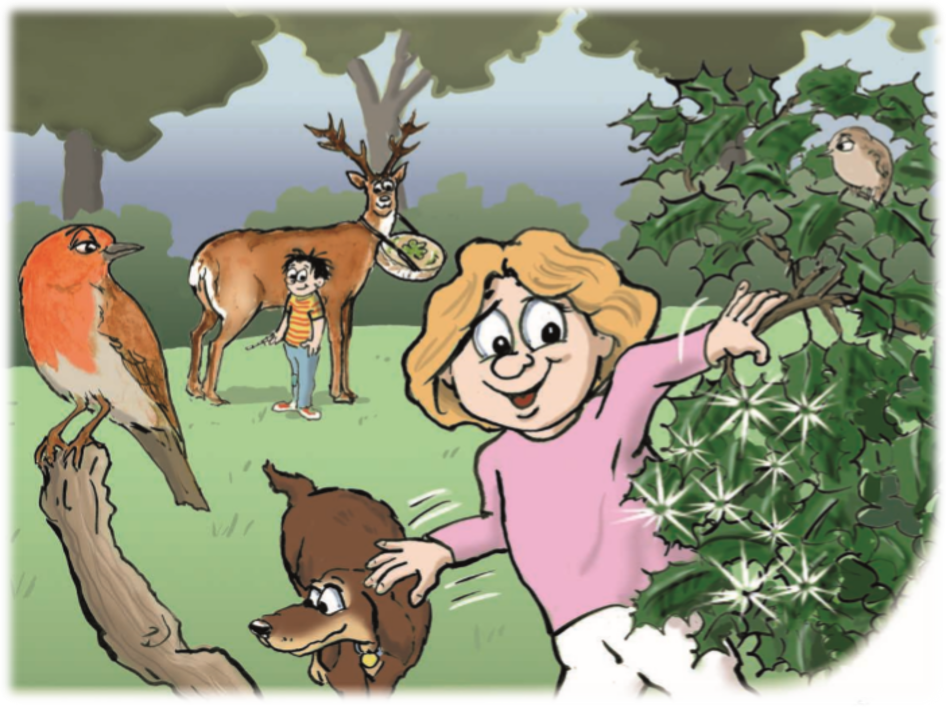 Have you ever stopped and been grateful for the beautiful, vibrant green and reds of holly and ivy during the dreary Irish winter?

These evergreen plants are to thank for the traditional Christmas colour scheme, green and red.

Holly and Ivy at a winter wedding

I was reminded of these beauties as this time last year I was out trimming some from our hedges for my little sisters wedding.

Which Christmas wedding would be complete without holly and ivy adorning the center piece of each table?

These evergreen plants are steeped in Irish stories and folklore. 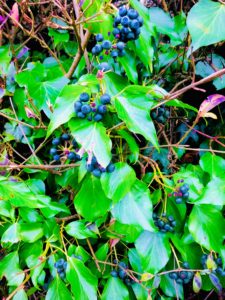 The ivy or eidhneán, represents fidelity, eternity and strong affectionate attachment such as a marriage or friendship.

According to folklore, ivy was used in herbal medicines:

An ivy leaf heated and put on a corn relieves the pain.

It was also used to treat burns and scalds by boiling the leaves with fat and making an ointment from it. Stopping bleeding and reducing inflammation was another of it’s claimed benefits.

The leaves remain on the plant throughout the year and from September to November they are joined by little yellow-green flowers. In spring, purple-black berries develop (and they are poisonous if eaten so ensure that’s one you make Little Explorers aware of.)

The sap contains an irritant to the skin which can induce dermatitis. So although it may represent love and friendship, it’s not the friendliest of plants!

The word ivy is derived from the Celtic word for ‘cord’. Many moons ago, the Irish Druids would have used it in their rites and magic. The Druids would also wrap their heads with ivy to bring clarity of thought (maybe one to try when no-one’s looking!)

Below is an old Irish rhyme which would be said as a love spell at Samhain.

“Nine Ivy leaves I place under my head

To dream of the living and not of the
dead

To dream of the man I am going to
wed

To see him tonight at the foot of my
bed.”

Here’s also an old Irish story about ivy which is from http://irishhedgegrows.weebly.com/flora.html 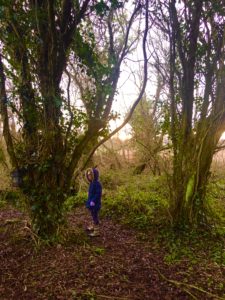 One evening late in November, which is the month when spirits have most power over all things, as the prettiest girl in all the island was going to the well for water, her foot slipped and she fell, it was an unlucky omen, and when she got up and looked round it seemed to her as if she were in a strange place, and all around her was changed as if by enchantment.

But at some distance she saw a great crowd gathered round a blazing fire, and she was drawn slowly on towards them, till at last she stood in the very midst of the people; but they kept silence, looking fixedly at her; and she was afraid, and tried to turn and leave them, but she could not. Then a beautiful youth, like a prince, with a red sash, and a golden band on his long yellow hair, came up and asked her to dance.

Dancing to the sweetest music

Then he lifted his hand and made a sign to the people, and instantly the sweetest music sounded near her and around her,and the young man took her hand, and they danced and danced till the moon and the stars went down, but she seemed like one floating on the air, and she forgot everything in the world except the dancing, and the sweet low music, and her beautiful partner.

At last the dancing ceased and her partner thanked her, and invited her to supper with the company. Then she saw an opening in the ground, and a flight of steps. The young man, who seemed to be the king amongst them all, led her down, followed by the whole company.

At the end of the stairs they came upon a large hall, all bright and beautiful with gold and silver and lights. Thr table was covered with everything good to eat, and wine was poured out in golden cups for them to drink.

When she sat down they all pressed her to eat the food and to drink the wine. As she was weary after the dancing, she took the golden cup the prince handed to her, and raised it to her lips to drink. Just then, a man passed close to her, and whispered–

“Eat no food, and drink no wine, or you will never reach your home again.”

So she laid down the cup, and refused to drink. On this they were angry, and a great noise arose, and a fierce, dark man stood up, and said–

“Whoever comes to us must drink with us.”

He seized her arm, and held the wine to her lips, so that she almost died of fright. But at that moment a red-haired man came up, and he took her by the hand and led her out.

Safe from the fairies

“You are safe for this time,” he said. “Take this herb, and hold it in your hand till you reach home, and no one can harm you.”

He gave her a branch of a plant called the Athair-Luss (the ground ivy). This she took, and fled away along the sward in the dark night; but all the time she heard footsteps behind her in pursuit. At last she reached home and barred the door, and went to bed. A great clamour arose outside, and voices were heard crying to her–

“The power we had over you is gone through the magic of the herb. But wait–when you dance again to the music on the hill, you will stay with us for evermore, and none shall hinder.”

However, she kept the magic branch safely, and the fairies never troubled her more. But it was long and long before the sound of the fairy music left her ears. The music she had danced to that November night on the hillside with her fairy lover 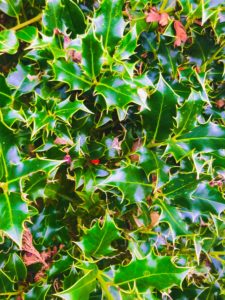 The beautiful holly or cuileann has some fascinating stories and traditions as well.

Holly was believed to be a protective force against evil or bad thoughts or spirits because of it’s prickly leaves and branches which would make it hard for anything to pass through. People would decorate their homes around the Winter Soltice to protect them against fairy mischief. You had to ask permission from the tree first though before taking it’s branches such as leaving a little piece of silver would be at the base of the tree (I was very bold and didn’t do this, yikes!) 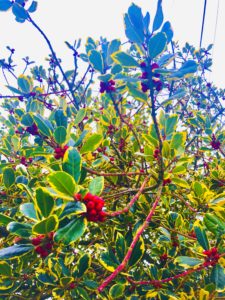 Many a holly tree was spared the woodman’s axe because of a superstition that it was unlucky to cut one down. This belief probably arose because of the tree’s evergreen leaves and long lasting berries. Leaving people to associate holly with eternity and the power to ward off evil and destruction.

People would place the leaves from a female holly tree under their pillows to help forsee the future in their dreams.

There is a legend of a battle between the Oak Tree King and the Holly Tree King as they both wanted to be the ruler of all seasons. The story goes that the Oak King was the ruler from the Winter Solstice until Midsummer, or Litha. Once the Summer Solstice arrives, the Holly King returns to do battle with the old king, and defeats him.

I purposely included the holly and oak trees in Johnny Magory and the Forest Fleadh Cheoil to pay testament to the old battle. 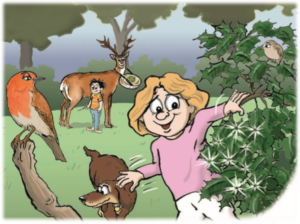 I love all of these old stories and traditions, the children do also. Not sure if I’ll be tying ivy around my head in public anytime soon but I will definitely give the holly under the pillow a try. I’ll let you know the future holds!