Ah the Mallard Duck or Lacha, a firm favourite with everybody.

This week we cover the duck from Co. Kildare Ireland. 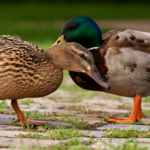 Here’s some key facts to recap on the Duck: